Stay up to date with the latest Chimney news! 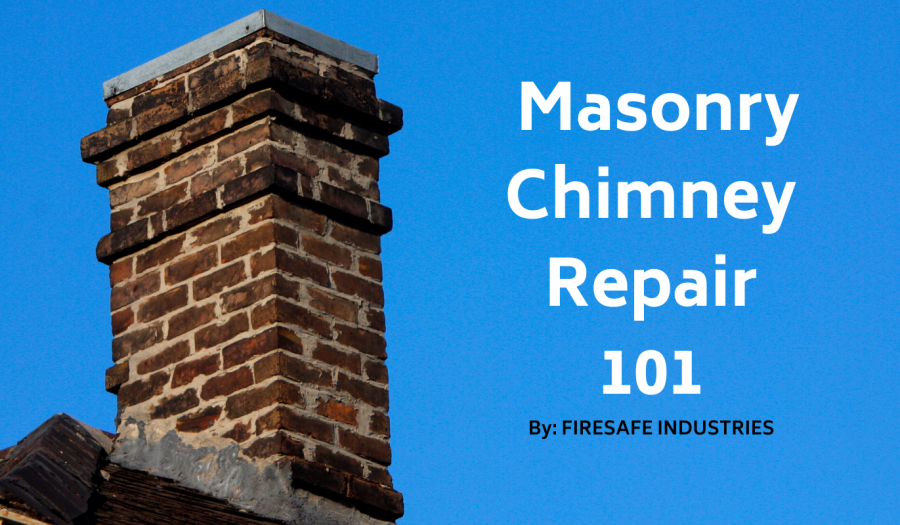 Masonry Chimney Repair 101 (Everything You Need to Know)

I will never forget the first (and hopefully the only) home fire I saw.

It was late one July 4th when evidently a neighbor a few blocks away had improperly stored his discharged fireworks. Instead of leaving them in a bucket of water, he had placed them in his garbage can.

As if placing his fireworks in a sealed plastic garbage container wasn’t bad enough, he then proceeded to leave the garbage can in his home’s garage.

By the time the rescue squad arrived, it was too late – the house had been ravished on all three floors by a sweeping hot fire. Luckily no one was injured in the blaze.

However, when diagnosed a masonry chimney is nothing to wait around for, which is why we wrote everything you need to know about masonry chimney repairs in this article.

What exactly is a masonry chimney and why would you need to have a chimney repaired anyways?

If you’re wondering what just exactly is a masonry chimney, don’t worry we got you covered. Chances are if you have a chimney at your home – it’s most likely a masonry chimney (unless it happens to be wrapped in siding).

A masonry chimney can be constructed using a variety of masonry (think stone) and metal materials including:

There is a high probability that you have seen a masonry chimney just about every day of your life. While masonry chimneys might not be “The Standard” on all new construction homes these days, most home buyers still prefer the satisfaction of a beautiful brick or stone chimney.

That being said, while masonry chimneys that are well built and properly constructed can last for a very long time (think of the Roman Arches that still exist to this day), that doesn’t mean all masonry chimneys are alike.

Some masonry materials can be susceptible to weather and rain, especially if improperly installed. Not only can your damaged masonry chimney look bad, it can also be extremely hazardous!

Some chimneys might have issues, which is why it’s good to know when and if a masonry chimney needs to be repaired!

There are some 374,000 house fires in the United States annually costing a staggering $8 billion dollars according to this article from 38 Companies Disasters Services.

What are the most common masonry chimney repairs?

A problematic chimney can stem from a multitude of causes and there are plenty of possible problems to go around. However, the most commonly seen masonry chimney repairs typically stem from:

Let’s take a quick look at each!

A crack in a chimney can be very evident, like in the photo below:

The purpose of your chimney is to properly vent the products of combustion (smoke) form your home. However, if the integrity of a chimney is compromised, say from a crack, this can be an issue.

If smoke and combustion materials are not vented away from your home they can build up in said cracks, thus causing fire hazards.

Cracks are one of the most common masonry chimney issues! If you don’t get them fixed, you might find yourself performing a chimney demolition and replace, which is super expensive.

A commonplace where you might find cracks in your chimney is in the crown. The photo above is actually an example of a failed and cracked chimney crown, another common masonry chimney repair item!

The number one cause for a chimney fire is a failure to clean a chimney adequately or often enough! Be sure to routinely have your masonry chimney swept!

The very top of a chimney is referred to as the “Chimney Crown.” Think of a king with his crown, you would notice a few things if the king’s crown was:

If any of these are happening to a masonry chimney’s crown, it is vital to get it corrected immediately.

For one, a Chimney crown can get worse, the longer you take to correct it. Learn about a Chimney Crown here!

Your Chimney liner is a vital component of a chimney system.

Depending on the chimney, a chimney liner repair can vary from centering and proper insulation to a refinished liner that is smoother. A smooth chimney liner is vital for a properly functioning chimney.

A proper chimney liner should provide:

According to Brick Restoration Inc.,

When water mixes with the creosote it becomes acidic which, in turn, causes premature rusting of the damper and speeds up the deterioration of the brick and mortar in your chimney & fireplace.

In other words, water penetration and outside weather factors are not good for your masonry chimney! Just like your home’s roof, a working chimney is vital for water protection.

Whether water enters from the crown or a crack in your chimney, or even around the chimney flashing, there are simple repairs.

Waterproofing, water sealants, repaired flashing and products like FireGuard are all solutions to a chimney impacted by water/weather! Which leads to our last and final chimney repair issue – design!

An improperly designed chimney can cause anything from a funky-looking chimney to some extreme issues, such as fire hazards.  One time a roofing company called us while replacing a roof to tell us about a damaged chimney, that was poorly designed.

Take for instance, the smoke chamber of a fireplace that is improperly designed or constructed.

Similar to how a car must be designed to perform while simultaneously providing safety, a fireplace is very similar. The smoke chamber, liner, crown, flu and all aspects of a chimney not only work together, but they also rely on one another!

You may or may not be able to see the faults in a chimney design. However, if you suspect something is wrong because you see what looks like a:

Then it doesn’t hurt to get a chimney expert’s opinion, just to be safe!

How much does the average chimney repair cost?

Last but not least – costs.

How much does the repair for a masonry chimney cost is a very common question, the issue? The answer really depends.

A simple inspection of a brick chimney might result in a $250 crack being corrected. However, chimney repair services can range from $250 to several thousand and up depending on the extent of what needs to be repaired.

In situations like this, it’s always best to contact a certified contractor to see what is needed.

While I have only seen one fire in my life, the sheer harsh truth is this:

There are some 374,000 house fires in the United States annually costing a staggering $8 billion dollars according to this article from 38 Companies Disasters Services.

So while in some cases it might not seem like a big deal to find a little brick in your yard from your masonry chimney, it doesn’t hurt to do your due diligence. As we part, here are some final words if you’re a homeowner with a chimney:

If you’re a contractor, be sure to get in touch with the team at FireSafe to inquire about our highly tested and national award-winning chimney repair products!

Tell us about your chimney.